RSS Feed
← GREE to Release a Durarara!! Smartphone Game
Screening of “The Last: Naruto the Movie” in the Philippines Once Again Delayed to February →

Heo Sae (age 23) a person overdue in debts for various reasons finds himself trying to hide from loan sharks. He happens to find refuge at a bath house. The owner of the bath house buys off his debt but in turn is indebted to him. The bath house owner believes that Heo Sae has a talent he himself isn’t aware of. Could he be the man with the Hand of God? The scrub battle to become the best bath coordinator is about to start.

God of Bath is the first Korean webtoon created by Ha Il-kwon that I have read. However, I finished reading Annarasumanara first since it was completed earlier than GoB. Line only released the latter’s last chapter in December even though the Korean version concluded years ago.

The story is actually simple and doesn’t involve any intricate plots or lingo. It didn’t fail to provide comical relief in each chapter which is the main reason why I enjoyed reading it. Despite its seemingly shallow plot, the story actually has a more profound meaning and moral lesson to it. It teaches you to follow what your heart dictates and not let society chain you from doing what you think is the norm. The happiness and satisfaction you feel from doing what you really desire is far more important than what other people will say about you.

God of Bath is hilarious and inspiring at the same time. It lets you find the hidden meaning behind its comedic setting. I am certain that employees will be able to relate to the story as it tackles the issues about money, colleagues and the society as a whole.

The story only has 30 chapters, which is short compared to other manga/manhwa that I have read. But the good news is, there will be a live-action film adaptation of this webtoon which will be released in summer this year. I have doubts whether the actors will give justice to the comical scenes but I am hoping that they will not be disappointing. I am definitely looking forward to watching this movie. But before you watch it, make sure you read the webtoon first! 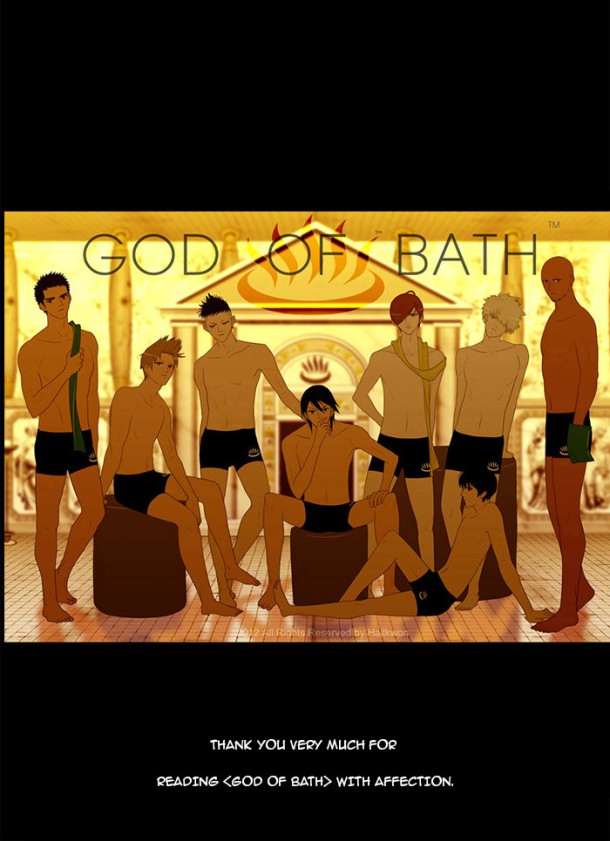 A frustrated writer and artist. Loves Kpop and Japanese anime/manga.
View all posts by otakubishounen »
← GREE to Release a Durarara!! Smartphone Game
Screening of “The Last: Naruto the Movie” in the Philippines Once Again Delayed to February →