What would you do if someone offered you a suspicious-looking drug and claimed that it would change your appearance to that of a 17-year old teenager? Furthermore, you would be part of an experiment in which you would have to return to high school for one year. Would you take the risk?

That is the plot of ReLife. 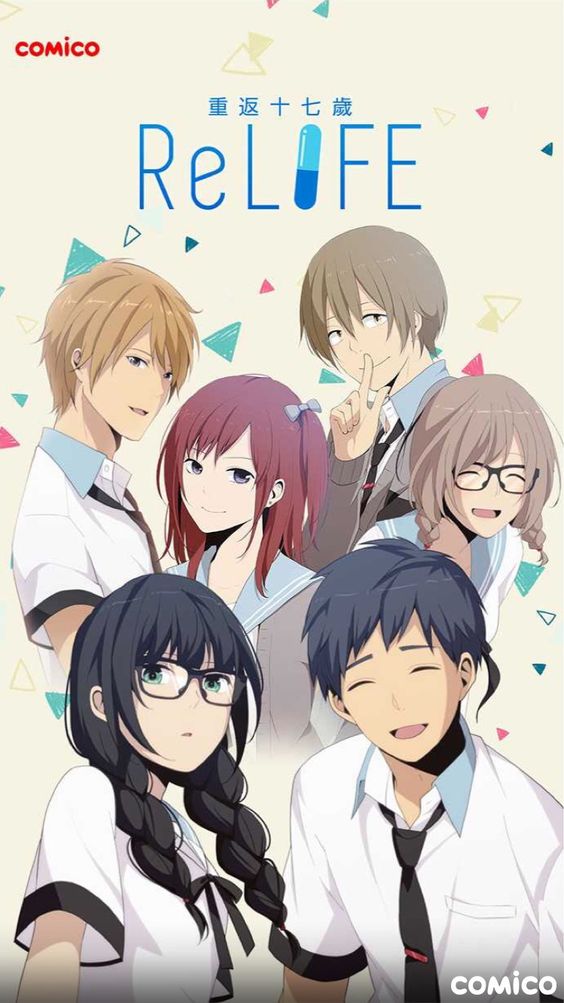 ReLife is a Japanese webtoon series created by Yayoiso in 2013 which ended with 222 chapters and published by NHN Japan on Comico. A 13-episode anime adaptation was released in 2016 with four additional OVA episodes. Back then, I was interested to watch this anime but due to hectic school schedule, I had to delay it until I eventually forgot about it. It was only last week when I suddenly remembered to watch ReLife because I was planning to bingewatch anime.

In just two nights, I managed to finish all the episodes of ReLife. But I was not fully satisfied with the short adaptation so I decided to read the series. It was when I got more absorbed to the story and characters to the point that I could actually relate myself to them. The series is filled with hilarious dialogues and scenes but it sure knows how to tug the hearts of its readers as well. It might just be a typical story that shows the hardships and issues faced by ordinary high school students (e.g misunderstandings and rivalries between friends, romance, a never-ending loop of makeup tests, etc.) but that is also one of its strong points since readers can actually relate to these matters. What’s not ordinary is that the protagonist, who has to act like a teenager, is actually a 27-year old NEET who is given another chance to relive his life as a third year HS student for one year. (NEET, according to Wikipedia, means “Not in Education, Employment, or Training.” In Japan, the classification comprises people aged between 15 and 34 who are not employed, not engaged in housework, not enrolled in school or work-related training, and not seeking work.)

As expected, NEETS are ostracized by the society, and these people are actually chosen as the subjects of the ReLife experiment to give them another chance in life. After the one-year contract, if it is successful, then the company will even provide the subject a list of jobs that he/she can apply for. However, there is a bigger reason and background story as to why these people actually ended up as NEETs. The lesson? Never assume and criticize someone’s situation without knowing the real story behind everything. ReLife teaches us life lessons and values that we sometimes overlook, ignore, or take for granted. It sure hits you right in the feels.

This story is all about growing up, facing the harsh reality of life and society, and overcoming all these problems. It’s about friendship and love, school and work. It will make you realize once again how important time is. You can never go back to the past; you can only look back and learn from your mistakes. But the wonderful memories you have created with your loved ones can never be erased.

One of my favorite quotes from the series:

“If at some point in life you made a mistake or keep falling over and over again. And you can’t help but think it’s useless and you’re a good for nothing; Remember, you’re only taking a detour. And I’m sure further along your path will come a day where you think: “It was a good life experience”. That’s why it’ll be fine.” – Chizuru Hishiro

I will not divulge or spoil anything else, because I want you to savor every dialogue, scene, and chapter of the story. Just expect to laugh really hard and cry hard as well. I actually had a difficult time trying to stifle my tears. This is definitely a must-read webtoon.

I have watched a lot of anime and read numerous webtoons so I think the art style is not that much special or different compared to others. Still, one of the reasons why I love reading webtoons is because all the chapters are colored compared to the traditional black and white manga.

It’s a masterpiece. It might actually appear pretty simple to some (and I’m sure this kind of plot, at least some parts of it, has already been tackled in other stories) but the impact of this series (at least to me) is heavy. I suggest that you read the webtoon because they deleted some parts in the anime and they also did some minor changes in the scenes.

At first, you would find some of them annoying, but what’s good about this series is that almost all the major characters undergo a transformation in terms of their beliefs and personality. I also find them relatable, and it probably will be the same for everyone else because we have all been through high school. As an adult, perhaps we have also experienced the ups and downs of being unemployed or bullied in the workplace. Be it as the competitive Rena or the forever-in-the-test-loophole Arata, we have all been there, one way or another.

A frustrated writer and artist. Loves Kpop and Japanese anime/manga.
View all posts by otakubishounen »
← I’m Back!
Hiroki Ino and Kousuke Asuma to Grace Cosplay Mania 2018 →