Kurokami no Onna, the Black-Haired Woman, wakes up to find Nona who takes her to the 15th floor where Decim works. She meets Clavis, the elevator guy before Nona introduces her to the bartender. It seems like she is clueless about the situation or the place, and she just follows what Nona tells her since she is assigned as an assistant. Nona takes her to a room where Decim’s dummies are hung, and they both watch the terrified guests from the other end of the glass.

“Do you know what the most primitive emotion people have is? It’s FEAR.” ©Madhouse

As the game progresses, Nona teaches  Kurokami no Onna about the death of Takashi and Machiko, and how arbiters like them pass judgment on the deceased based on their life memories.  The Black-Haired Woman seems to be equally shocked just like the couple, and she gives her own opinion about the situation. After Decim sends off the couple to their respective destinations, he is met by Nona and Kurokami no Onna, who expresses how awful the whole procedure was. She asks him why Machiko is sent to the void, even though she just lied about her having an affair with another guy. Decim looks surprised, and he questions her about her hunch that the child is Takashi’s even though Machiko herself admitted that she had a fling.

Nona: “Everyone makes mistakes. But then, people’s feelings often get expressed in random ways. You’re an arbiter; don’t just brush them off. ” ©Madhouse

Thinking that he might have a faulty decision, he is about to ask Nona but the latter suddenly pulls him by his bowknot and lectures him about arbitrating. He nods at her with a clenched fist as he serves the ladies some drinks. Afterwards, Nona leaves Kurokami no Onna at the bar and enters the elevator again to return to her abode. There, Clavis asks her about her impression of the new assistant, and she unknowingly and subtly praises her, much to Clavis’ surprise. However, as she recalls what the woman said earlier about the couple’s happiness, she takes back her compliment and tells herself that no matter what happened, Takashi wouldn’t have a happy life because he couldn’t trust others.

The elevator in Queen Decim opens to reveal a man and a woman who turn out to be a married couple. They mysteriously find themselves in an unknown bar without remembering anything else aside from their memory about their honeymoon trip. They are welcomed by a bartender named Decim, who explains their current circumstances. According to him, the couple has to stake their lives on a game which will be decided by the roulette, and they cannot leave the bar unless it is over. Upon hearing the absurd rules, the two try to find a way out of the bar, but to no avail. The bartender shows them a stack of corpses hanging behind a glass room, implying what will happen to them if they refuse to play the game. Without any other options, the couple presses the button and the roulette selects the game that they have to play.

That instant, the bar gets altered and two big dartboards are displayed in front of the couple where each of them will take turns in playing until one of them is down to zero point. The targets on the board have regions of the bodies inscribed on them, which are linked to the players’ nerves. Hence, the two of them will feel pain where the dart is thrown, and the greater the score is, the greater pain the pain will be.

At first, the two were skeptical about the game, but as they progress, they realize that what Decim told them is real. As Takashi confronts the bartender, he is given a hint that they can just intentionally miss the target. Just when they only have two more darts left, the two them “inadvertently” hit the targets, causing pain for both for them. Takashi, who seems angered when Machiko strikes his eye, is about to throw his dart when his wife begged him not to hit at least her belly. It is then revealed that she is 10 weeks pregnant, which makes Takashi regain his composure. But as he is about to throw the dart, a sudden flash of memory causes him to jolt and the dart hits the region of Machiko’s belly.

The two of them quarrel, and Takashi seems to remember how he found out that Machiko was having an affair when he overheard her friends talking on the day of their wedding ceremony. Machiko denies it, and as they argue, her memories return, and the dart that she throws unsteadily pierces Takashi’s heart, causing him to cough up some blood. Decim declares Machiko as the winner, but Takashi attempts to continue the game. That is when she informs her husband that there is no use continuing it, since having her memories back makes her realize that they are already dead.

As the bartender explains the existence of Queen Decim, Takashi suddenly has a vision of his final moments with Machiko before they plunge to their death. Convinced that his wife cheated on him, Takashi seems deranged as he refuses to accept their child and reviles his wife. Machiko is extremely shocked at her husband’s behavior, as if the man in front of her is different from the guy she married. She walks away from him and snickers at him as she affirms his suspicions.

(It’s hard to tell if everything was just an act, but judging from Decim’s reaction and Machiko’s expression at the end of the ep, I believe that she just lied to her husband when she affirmed her “affair” with another guy. ©Madhouse

Takashi completely loses his mind as he runs towards her with darts in his hand, ready to strike her. However, Decim, the arbiter, stops him with his strings until he loses his consciousness. He motions Machiko back to the elevator as he carries Takashi inside it where the two of them will be sent to their respective destinations.

Takashi’s soul is sent for reincarnation, while Machiko’s sent into the void. ©Madhouse

Death Parade, a new TV anime series based on 2013 Anime Mirai‘s “Death Billiard”, will debut on January 9 on Nippon TV. It will then be shown on Sun TV and AT-X on  Jan. 13 and 22, respectively. Yuzuru Tachikawa, the creator of the animated short, is also directing the TV series which is produced by Madhouse Studio. 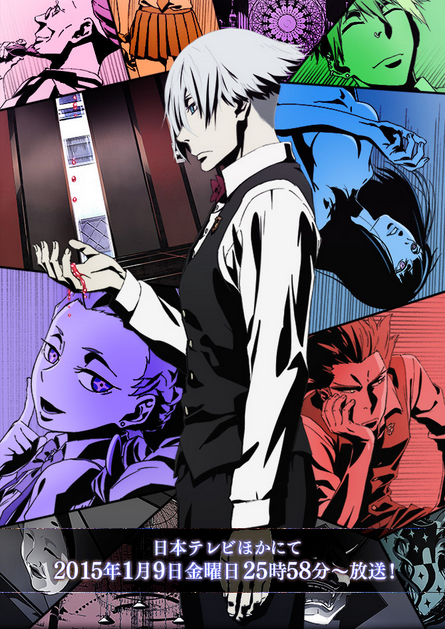 The official website of the anime released two promotional videos, the first which is actually taken from the original Anime Mirai 2013 short film.

The website has also released the character art and key visual for the upcoming anime series. Tomoaki Maeno will join the cast as the “Bartender/Dekim” together with Rumi Okubo and  Yoshimasa Hosoya as Nona and Ginty.