Gon reaches the top of the World Tree where his father is waiting for him. The two of them finally have a heart-to-heart conversation with each other after all the things they have been through. Ging reveals his intentions to Gon about his plan to explore the outside world and there, they discuss all the journeys they have taken as they reminisce their past. All the main characters in the series are shown pursuing their goals as each of them proceeds with their own lives. They are all walking a different path but the friendship that has blossomed among them will remain the same even in the future.

I still can’t believe that this anime is already finished. Until now, I’m still fervently hoping that the producers and everyone behind the anime adaptation of this manga will continue to animate the next arc. (Now I’m not really sure but I heard that Yoshihiro Togashi put the manga in “hiatus” which explains the reason behind the finale of HxH. I haven’t read the manga yet but I will definitely check it one of these days.)

I have been watching this series since it was first shown in 1999. I was glad when I learned that a reboot was made so I have always kept my eye on the second anime adaptation since then. But when I found out that they are going to end the series with this arc, I was crestfallen. I was looking forward to seeing more episodes and I was kinda expecting to get to know the new characters in this season a bit more. Pariston and the other members of Zodiac seem to play important roles in the next story, though I have only a slight gist about the next arc. I feel sort of disappointed that Kurapika didn’t even get to reunite with the others for the last time. And what happened to Chrollo and the rest of Phantom Troupe? What about Hisoka? I’m so sorry. I have so many questions since I don’t read the manga but now that the anime is over, I guess I have no choice but to read it to find the answers to my own questions.

To sum it up, Hunter x Hunter is one of those anime that will forever be engraved in my memories. I have come to love and appreciate all the characters in the story, both the antagonists and the villains as well. I am especially more inclined toward Gon and Killua since they have been together from the first arc until the very last episode which showed how their friendship has grown much stronger throughout each scene. Seeing each of them go their separate ways at the end of the series somehow makes me sad. But I do know that the bonds and memories they have made together will always remain in my heart, as if I were really a part of their world.

Thank you Hunters. ‘Til our next meeting… 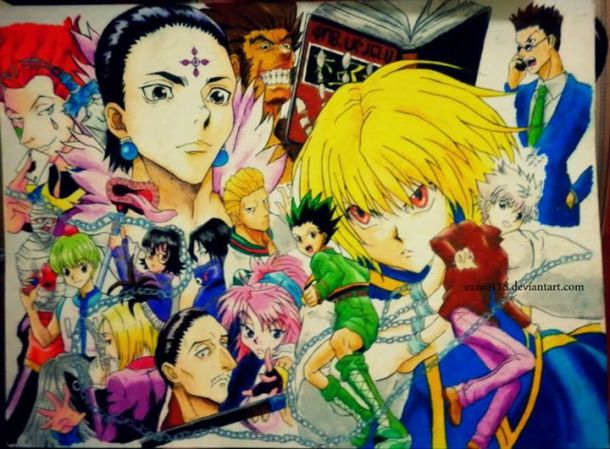 (This was the only HxH artwork I’ve made so far.)

If you are a big fan of anime and manga, I’m sure you have somehow gotten through the different stages of joy, denial, and remorse following the end of your favorite story. I know that feeling—an overwhelming rush of complicated emotions that threaten the very existence of your sanity.

Trust me, I have been in that black hole to and fro, every time I finish that last episode of an anime, or whenever I flip the last page of a manga. I have listed the cycles I’ve been to in the past several years of my life, thanks to (or probably not) those anime and manga that have seeped through the depths of my life.

When the thought of the ending dawns upon you, you feel an overwhelming excitement rush through your veins. You are excited to know how the story will conclude, and whether your favorite OTPs will get together in the end.

Yes, you get frightened with the impending doom that’s about to ensue. Regardless of its genre, there is a big possibility that one of the main antagonists might die. (Or your OTP might break up. I don’t know which is more distressing between the two.)

After all those sleepless nights that you had the previous days, you can finally heave a sigh of relief once you realize that your fears are groundless. Fortunately, none of your favorite characters died, and your OTP actually ended up together. It’s now the right time to rejoice! That “happily ever after” ending actually exists. And you’re thankful for that.

After the jovial celebration comes the sudden realization that the story is already finished. That very truth will haunt you the moment you switch off your TV or exit the video player. Wait. That’s it? And the next phase begins.

Even though the anime already has 600+ episodes, or the manga has more than 700 chapters, they would still be insufficient. None of them is enough for a hardcore fan like you. You refuse to accept the fact that the story you have monitored for the last couple of months or years has already ended.  You will try to search every portal to see if you have missed some episodes or a mistake has been made. Unfortunately, everything is just in vain. Truth really hurts, doesn’t it? (Well, you can always try to begin watching a new series immediately to cover up your grief and make you move on more quickly.)

The stage of denial usually takes the longest time for recovery, but after all those excuses and questionings you’ve done, you will gradually learn to accept the bitter truth. Just like in a relationship, you can never move on unless you acknowledge that it already ended. And when you do, you can engage yourself again to another commitment.

Now that you’re over with your previous anime, you are now fully prepared to start all over again. You can begin reading a new manga or watch a new episode. You will have a new OTP. You will get drowned with various sorts of feelings. But then at the end of the day, you will always return to the very first phase of this cycle. After all, this is just like a roller coaster ride. You get thrilled and excited from the moment the ride starts until the climax, but you will always have to get off after a couple of loops and curves.

It’s extremely difficult to move on especially if you have been keeping track of that story for years. You have been waiting for a new chapter to be released every week. You have been staying up late at night just to watch the new episode. You have been praying a lot for a new season to come out immediately. You have been saving up ’til now just to purchase the newest merchandise available online. These are the reasons that make it hard for you to deal with the finale of your favorite anime/manga. But even though its story has come to an end, the characters that you have learned to love will always remain in your heart…forever.  *sniffs*

How about you guys? Let me know how you coped with the ending of your favorite show/manga.

Posted in Anime, Manga and tagged anime, anime ending, ending, feelings, finale, how to deal with the finale of an anime/manga, manga, manga ending, personal. Bookmark the permalink.