“Rurouni Kenshin: The Legend Ends” is a Masterpiece that has no “End”

“Set in the early Meiji period, an assassin from the Bakumatsu war returns not as a hitokiri but as the rurouni Kenshin, with his vow not to kill and instead, protect those in need to atone for the murders he committed in the past. But the peace in the new age is threatened with the appearance of his successor, Shishio Makoto. Will Kenshin be able to fulfill his vow while protecting his friends and loved ones with just a reverse-blade sword? The burden of saving the whole nation weighs him down as he faces a much more powerful enemy apart from Shishio, and that is the ghost of hitokiri battousai that still dwells within him. “

The live-action film adaptation of Nobuhiro Watsuki’s renowned manga called Rurouni Kenshin has so far caused a stir among the fans all over the globe. The first movie set a strong foundation for the sequels that were (and will be) released this year. The frenzy surrounding the two new installments proved to be fairly justifiable as both movies raked in millions of dollar in gross income in Japan alone. Kyoto Inferno has also become a certified blockbuster hit when it was released in the Philippines last August 20. And it is no surprising if the third movie receives a much warmer response than before especially that thousands of moviegoers have already been flocking the cinemas since it was released this September.

So how did The Legend Ends conclude? That is the main concern of everyone who was left hanging in midair when Kyoto Inferno ended. And what Director Otomo and the rest of the cast gave the audience was something befitting of the story of the legendary battousai—a truly remarkable masterpiece that breathed life to the fictional characters and enabled the viewers to explore the world of Himura Kenshin.

It is true that some parts of the original story were altered, and it was also extremely regrettable that some scenes that I was looking forward to see were not even included in the film. But the climax of the movie was so breathtaking that not a single soul inside the cinema dared to move. Takeru Satoh and the rest of the actors portrayed their roles perfectly and all the stunts were executed flawlessly. The cinematography and choreography of the swordplay were nothing but pure brilliance. Though some bits of the script were changed, the director was still able to convey the whole meaning of the story about Himura Kenshin’s vow to protect the people with his sakabato as well as his significant connection with the rest of the characters. It’s truly unfortunate that most Juppongatana members were not given longer screen time but like I stated before, the main battle between Kenshin and Shishio Makoto fueled the void. And oh, did I forget to mention how Shishio’s sinister laughter and Soujiro’s deranged act sent goosebumps to my body? Those scenes are totally a must-see. The overall gripping and action-packed scenes were blended with just the right amount of comedy and romance, providing the audience with 100% satisfaction.

“I have an enemy I must defeat.” (Taken from the trailer of The Legend Ends)

Words are probably not effective enough to describe the ingenuity of this movie adaptation. Never in the previous years had I imagined that the infamous hitokiri would come to life through the portrayal of Takeru Satoh. Even those who are not originally fans of the manga and anime have shown great interest in the movies, and they have nothing but praise to offer as well. And now, I must say that I am extremely grateful to all the cast, director and production staff behind the creation of this live action film that is, by far, the best movie adaptation I have seen throughout the years. And with all the flashbacks about Himura Kenshin’s scar that were shown in the movie, I am fervently hoping that a prequel will be announced soon.

To read my summary of The Legend Ends, click here.

Kyoto Inferno Vs. Kyoto Arc: Which Is More Fiery?

For those hardcore fans of Rurouni Kenshin, the release of a live-action film adaptation was like a dream come true. Many got excited, while others were uncertain if the cast and director of the film would do justice to the original concept of Rurouni Kenshin. (Since we have already seen a lot of movie adaptations that were a big DISAPPOINTMENT.) The first RK movie was released in 2012, and though others were a bit disappointed with the slight changes in the story, the overall reception for the movie was good. Two years after, a two-part sequel is slated to be shown simultaneously in Japan and other countries in August and September.

The second and third films mainly tackle the Kyoto arc in the anime series. Rurouni Kenshin: Kyoto Inferno is now showing in local cinemas in the Philippines, and it already became a box-office hit in the country just like in Japan after grossing P7.3M on its opening day on August 20. And as a big fan of the manga and anime series, I was looking forward to the live adaptation of Kyoto arc. It is, in no doubt, one of the best parts of the series, and I’m sure that many of us fans are curious to know how the actors would breathe life to the characters in the anime. So I decided to compare the movie to its animated counterpart and make a list of comparison in both stories.

(Note: This contains spoilers about the second movie, Kyoto Inferno. In response to the changes made in the movie, Director Keishi Otomo stated some of the reasons why he opted to alter some parts of the story. Read the interview here.)

In the anime though, the first meeting of the two was when Saito forayed Shishio’s  mansion in Shingetsu village together with Kenshin.

Yosuke Eguchi, the actor who played the character of Saito Hajime, was initially introduced in the first live-action film Rurouni Kenshin where the story revolved around Kenshin’s battles with Takeda Kanryu and Udō Jin-e.

In the movie, the setting was just slightly changed since the act was done during the day. And unlike the anime, it didn’t have any fireflies around (which for me, gave a more melancholic factor to the ambiance of the scene.) But nonetheless, the actors were able to capture the heartbreaking scene on their own way.

Aoshi was first introduced in the anime during Takani Megumi’s escape from Takeda Kanryū since he was employed by the latter to serve as his bodyguard together with other Oniwaban members. Therefore, the two of them already knew each other from the very start. Later on, when Aoshi began his quest to find Kenshin, he chanced upon Megumi who was left as the caretaker of the Kamiya residence when the others followed Kenshin to Kyoto. He threatened to kill her if she would not disclose Himura’s whereabouts but she still firmly refused. Saito Hajime arrived and told him the location of the battousai.

The fight between Okina and Aoshi took place during the Kyoto commotion in the movie. That time, Aoshi hasn’t met Shishio yet and he was just looking for Kenshin himself. That was when he was confronted by the old man. 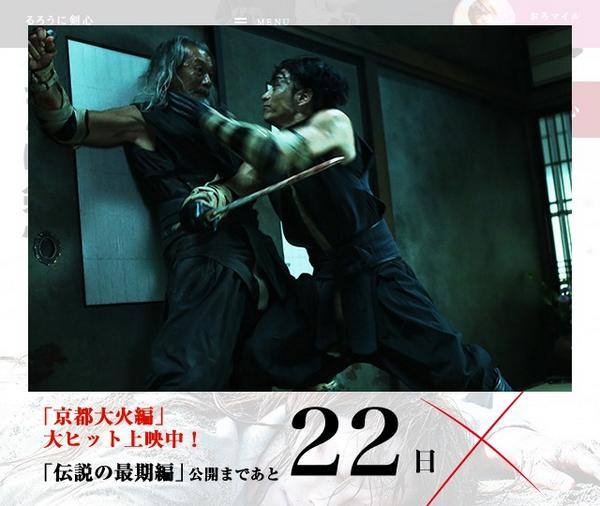 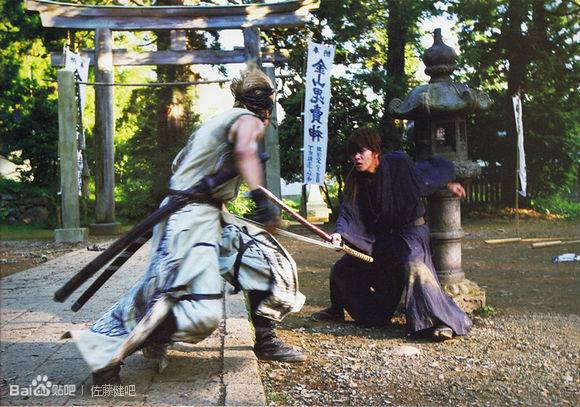 In the live-action film, the three aforementioned characters helped the Oniwabanshu and police division extinguish the fire that threatened to burn Kyoto. That was when Sanosuke finally met Kenshin after he wandered to Kyoto on his own. Kenshin and Saito later realized that the plan to burn Kyoto was just a diversion, and as Kenshin began running towards Shishio’s location, he saw a horse carrying Seta Sojiro and Kamiya Kaoru who was knocked unconscious by the former.

During the Kyoto commotion

In the anime though, Kaoru wasn’t actually kidnapped by Shishio nor thrown out of his battleship Rengoku. Instead, Shishio’s warship was actually wrecked by the bombs given to Sano by his friend Katsu. Without any other choice, Shishio and his underlings had to evacuate the vessel, leaving the three behind. Shishio and Kenshin both agreed to settle their match at Mount Hiei where their epic battle took place.

These were so far, the biggest changes done to the movie compared to the original story that I can remember. (I might as well update this one when I recall the others LOL.) The scenes were also not shot in the proper sequence. (Take for example, the appearance of Kenshin’s master, Hiko Seijuro. He will be introduced in the third installment instead.)  The other Juppongatana members were also just briefly shown, but I’m expecting that they will be given more screen time in The Legend Ends. There are other minor differences in the film but given the limited time (as explained by the director), I must say that he and the whole production did an excellent adaptation to this world-renowned manga. I am a big fan of both the manga and the anime series, and I am now also in love with the live action movie. I instantly fell in love with it when I watched the first RuroKen movie, but after I saw the sequel, my obsession got even higher. 😛 I highly commend all the actors and actresses who perfectly portrayed their roles, especially Takeru Satoh who is like the real-life version of Himura Kenshin. Overall, Kyoto Inferno has a lot to offer to all the fans of Rurouni Kenshin. It’s an action-packed movie overflowing with sword techniques you never expected to see in reality. Its intense scenes would surely drive you to the edge of your seats as you breathlessly wait for the next one. As you glue your eyes to the screen, you would just find yourself laughing, crying, cheering, and sharing the same emotions with the characters (and the rest of the audience in the theater). It also gives us some knowledge about Japan’s history since some of the names are actually based on real Japanese figures. (Go search for them!) Personally, I would give the movie a rating of 8 out of 10. Or 9, perhaps? *big grin*

There are a lot more scenes you have to watch out for, especially the ones that involve a sword fight with Himura Kenshin and his opponents (like Shishio’s subordinates in Shingetsu village). I believe that the highly anticipated finale will surpass this one. The hype is getting even higher as the date advances. Rurouni Kenshin: The Legend Ends will premiere in Japan on September 13! Watch out for it!